Close Menu
Back to Blog Posts
Working with Partners

The business community can be a powerful partner in collective impact. The overwhelming majority of collective impact initiative leaders we surveyed for our new report said that business involvement enhanced their initiatives’ ability to improve educational outcomes for children impacted by poverty. The value business brings to an initiative is significant, from relationships with government officials at all levels, to access to resources, to expertise in designing and executing strategies. These attributes often complement those brought by nonprofits organizations, foundations, public education and other participants. We believe, and more importantly, initiative leaders believe that business involvement materially enhances the odds that collective impact will live up to its considerable potential.

In our new report, Business Aligning for Students: The Promise of Collective Impact, we urge business leaders to actively engage in collective impact (CI) initiatives that support public education from cradle to career. Our research on the role of business in collective impact provides insights into why business leaders engage, the roles they play, and their expectations. We learned what motivates business to become involved in CI, and what concerns them.

We conducted over 60 interviews and site visits as well as a national survey of collective impact initiative leaders and the business leaders who serve on their leadership councils.  We found that the collective impact approach resonates with business leaders. They find its logic compelling – including understanding that it takes time to implement CI and that it requires a deeply collaborative approach. We discovered that business leaders involved in CI rejected short-term thinking and top-down approaches.

The survey underscored that many business leaders are making critical contributions to collective impact. For example, GE Aviation personnel introduced the concept of continuous improvement to the StrivePartnership almost at its inception. Managers from GE recognized the applicability of GE’s proprietary Six Sigma process for driving down production defects to collective impact. They then worked to adapt Six Sigma into a social service and educational context. Today, these ideas and processes are foundational to the StrivePartnership.

We also learned that improving public education is vitally important to business leaders. American business needs an educated workforce to successfully fill 21st century jobs, and many businesses report that finding adequately skilled workers is difficult. Business also needs to expand its consumer base, and better-educated people generally earn more and can therefore spend more.  But this is just part of the reason why business generously contributes $3-4 billion and many volunteer hours per year to support K-12 education.

According to The Challenge of Shared Prosperity: Findings of Harvard Business School’s 2015 Survey on U.S. Competitiveness, business leaders are deeply concerned about the lack of shared prosperity in our country. They place a high priority on changing these conditions.  In the annual survey of HBS alumni, two-thirds of the respondents reported that addressing inequality, middle-class stagnation, poverty, or economic growth was their top priority for change, with the remaining one-third identifying boosting GDP as their top priority. In open-ended questions, respondents identified education as the first- or second-most-important cause and the first- or second-most-common remedy to rising inequality, rising poverty, middle-class stagnation, and limited economic mobility.

This current research on collective impact builds on our earlier work examining the role of business in improving public education. We hope that insights from our work will help engage the business community more effectively in helping to transform American public education. 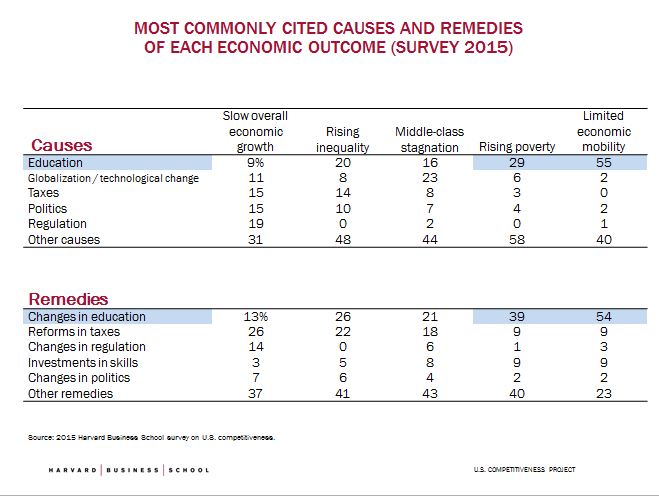 While appreciating the importance of improving public education, many business leaders have been reluctant to become involved. They recognize that sustained education reform is complex, difficult to achieve, and often contentious. In interviews, one business leader commented, “Education reform is not for the faint of heart.” Another voiced a plea: “The business community is desperate for leadership and a clear, crisp, concise, consolidated, collaborative view of what will yield the best outcomes.”

For business leaders who share these perspectives, collective impact, first articulated by John Kania and Mark Kramer in their Stanford Social Innovation Review article, has strong appeal. They see CI as a fundamentally different approach, one that measures results, is outcome oriented, and offers a structure and a process for achieving sustained education-ecosystem change. The approach resonates with business leaders who, in their businesses, measure progress toward specific goals and work in teams to achieve shared objectives. Virtually every business leader interviewed was compelled by the logic of the collective impact approach. They acknowledged and appreciated the execution challenges in public education reform, but were undaunted, citing that they face many similar challenges every day in their business lives. 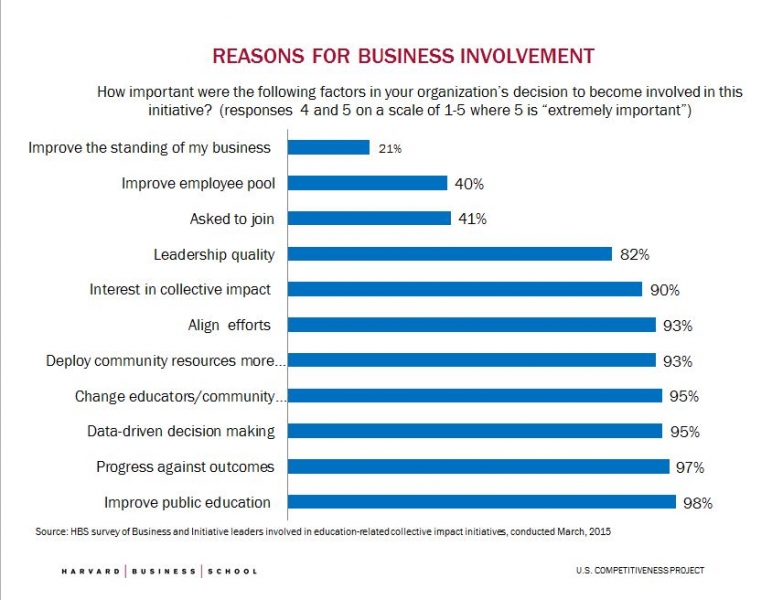 When asked about concerns they had before joining an initiative, many business leaders acknowledged the ambitiousness of trying to improve the education system. Others cited concerns about the slow pace of change, the time commitment required, and the frustrations they would inevitably encounter. 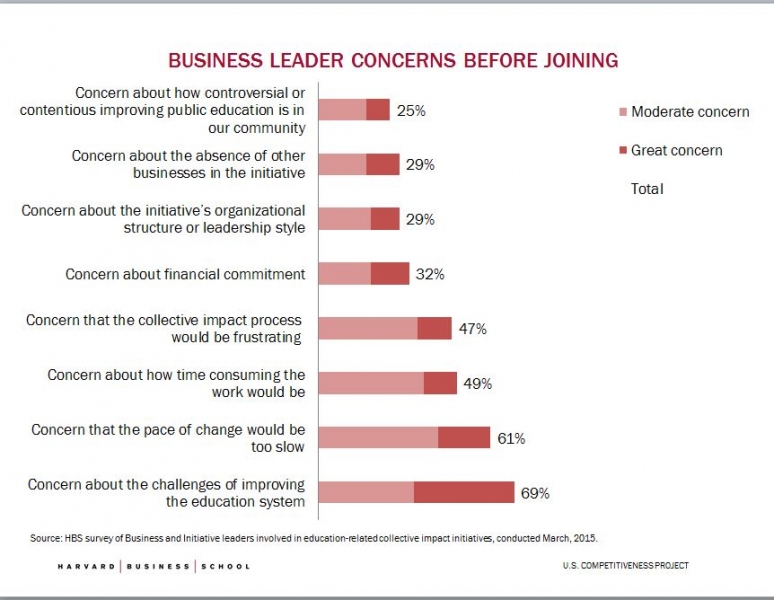 Despite just under half of the business leaders expressing concern about how time consuming the work might be, a significant majority were willing to commit for the long term. Over two-thirds expected to remain involved for three years or more, including 26% who expected to be involved six years or more. Fewer than 20% of business respondents expected to be involved for two years or less, with the remainder answering they didn’t know. While the intended commitment for most business leaders is less than the six to ten years that most believe it will take to achieve their initiative’s goals, it is comforting to see that business understands the time frame needed for change and is willing to make a long-term commitment.

Some initiative leaders shared with us that they were unsure when to approach the business community for engagement. Our survey revealed that business became involved at all stages of an initiative–from inception to when it was fully operational. In a number of instances, it was a person from the business community who proposed the idea of collective impact into their community. For example: 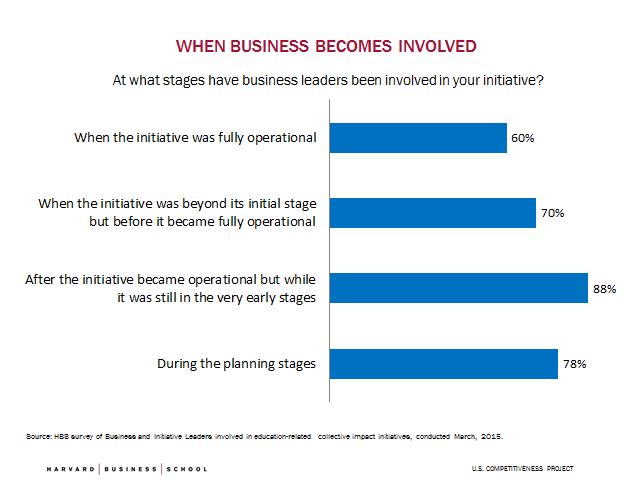 Initiative leaders overwhelmingly believe that business involvement is either “critical” (56% of respondents) or “very important” (40%) to their future success, with the remaining 4% reporting that business involvement was “somewhat important.” Most of our survey respondents (81%) reported involvement from the business community, including C-suite executives, their employees, or both.  C-suite executives (current and retired) and partners in firms often serve on leadership councils. Corporate employees volunteer as in-class tutors for a number of initiatives. To help encourage employees to volunteer, Savage Industries in the Salt Lake region in Utah grants their employees paid time off to volunteer during the workday. In other initiatives, business employee volunteer to staff workdays hosted by local public schools. Overall, almost 80% of initiatives reported participation by employees who were not at senior levels in their firms.

Leaders from Chambers of Commerce are partners in just over 70% of the initiatives we surveyed. The mission of helping their communities thrive economically makes chambers of commerce natural partners. The Association of Chamber of Commerce Executives has a new resource page for chambers engaged in collective impact initiatives that received hundreds of hits soon after its launch. 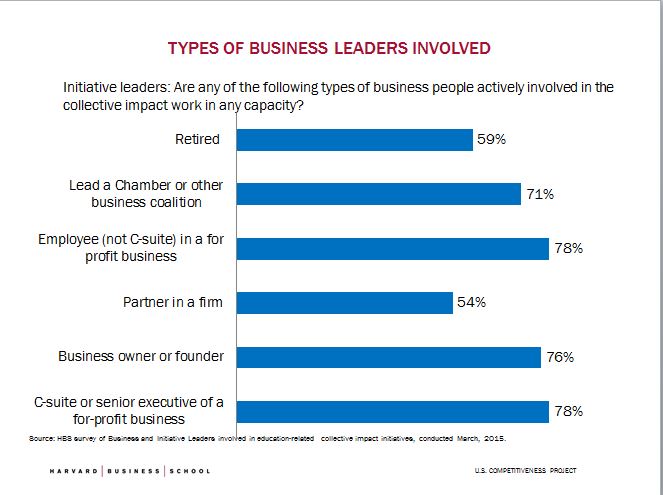 We found that while large national company involvement is often highlighted (including by us), local companies, (those whose headquarters and activities are located in the community) typically contribute the most. Local companies are involved in 90% of the initiatives with business involvement, and over half of our respondents credited local companies with providing the majority of businesses’ total effort. As a group, our survey respondents reported contributions from all types of companies, with eight reporting involvement from companies headquartered outside the U.S. and two reporting involvement from a company with no local operations, headquartered elsewhere. 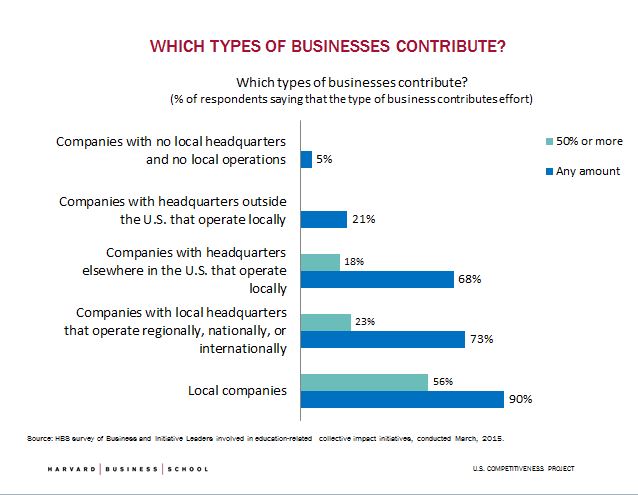 How Business Can Help 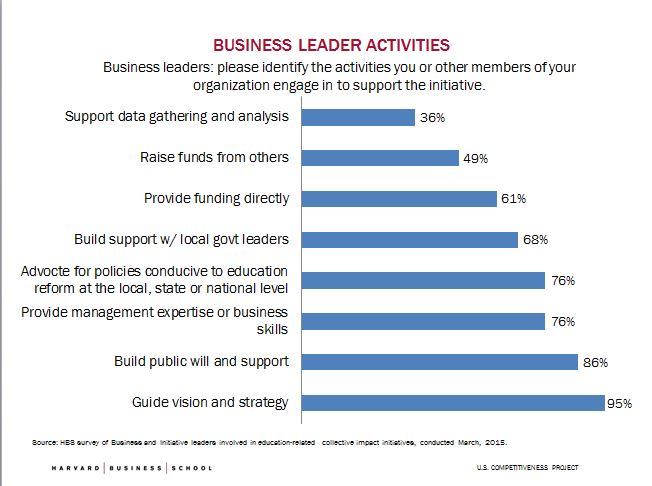 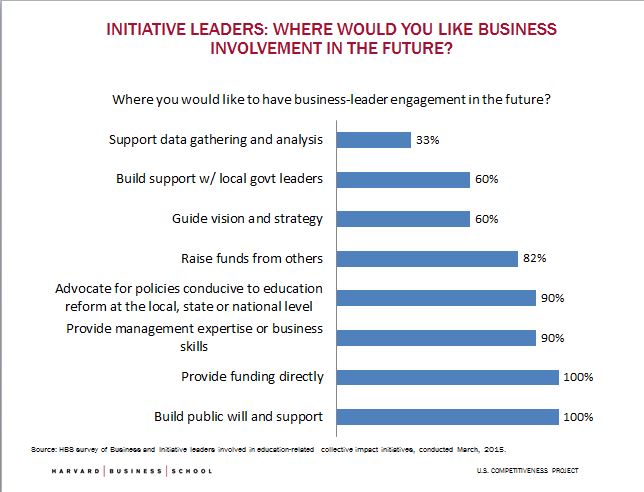 How to Bring Business to the CI Table

So how should initiative leaders go about attracting business involvement? One CEO we interviewed said that more CI participants just need to ask business for their help. “No one asks us,” said one businessman we interviewed.  Another business leader commented that he made a number of “asks” to his peers and had never been turned down. While this may not always be the case, it does underscore the importance of a deliberate focus on inviting business leaders to join a partnership.

The odds of successfully inviting business to participate increase if initiative leaders or others in an initiative explain, in detail, the problems the organization is attempting to solve. Business leaders often do not have insights into how the current delivery system for services, essential to youngsters impacted by poverty, is under-performing within a community, and how this deficiency materially impacts a student’s ability to succeed in school. With a firm grasp of the problem, business leaders become primed to recognize why collective impact has the potential to be a game changer.

We hope our research and analysis will help collective impact leaders make a more compelling case to potential business partners in the community to join their work. While business is only one stakeholder in an effective CI partnership, business leaders, with their considerable resources and expertise, can increase the odds of success. It is safe to say that more business involvement with collective impact means more community impact.

Have questions to ask? Or want to share your experience bringing the private sector into collective impact? Share your thoughts in the comments.