Close Menu
Back to Blog Posts
Backbone and Governance

This is the second in our conversation series with experienced backbone leaders. (see this blog post describing the series.)

In this conversation, we spoke with Chekemma Fulmore-Townsend, President and CEO of the Philadelphia Youth Network (PYN). PYN serves as the backbone organization for Project U-Turn, which aims to galvanize collective commitment and action to address Philadelphia’s dropout crisis. Project U-Turn has contributed to impressive results over time, such as a 14% increase in high school graduation rates since 2002 (source: Project U-Turn website). They have also helped more than 9,800 youth reconnect to education and/or employment pathways, and leveraged and/or realigned $230M in public and private funding to support dropout prevention and re-engagement services.

If you have questions for Chekemma, please pose them in the comment box below, and she will do her best to respond. Thanks, and enjoy!

Highlights from my conversation with Chekemma:

David: What are you most excited about today regarding Project U-Turn? 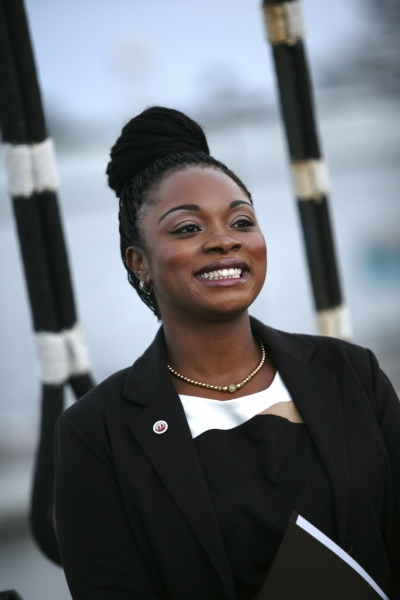 Chekemma: Quite a few things! We recently released the report A Promise Worth Keeping: Advancing the High School Graduation Rate in Philadelphia, which looks at the effects of our prevention and intervention efforts over the last 4 years. The report shows we’re making gains supporting youth with foster care and juvenile justice systems with graduation rates increasing 16 and 20 percentage points respectively for the two groups.

I’m also excited about our continuing efforts to increase high school graduation rates. Graduation rates have increased significantly since Project U-Turn began, going from 52% to 65%. However, while rates are increasing for African American and Hispanic males and those in the juvenile justice and child welfare systems (some with double digit increases), they still lag behind peers. I’m excited to see progress, but it’s energizing to see how much more work we have to do.

You’ve had some very positive impact. In general, how did that change come about?

First, we had to understand and unite around the dropout crisis: what the challenge was, who was affected, and how we can work together differently. Once we had that understanding, we wanted organizations to take that microscope back to their own systems and get clear on how they’re contributing to the solutions or the problems. Importantly, we agreed not to blame each other.

Second, we needed a shared goal. We knew that we wanted to measure graduation rates, but there were still some dissonance about how to calculate it (e.g. 4-year vs. 6-year graduation rates). Having an agreed-upon graduation rate as our north star was important.

Third, we looked at how to reimagine investments. We knew that new investment wouldn’t solve the problem, so we also tried to reimagine how existing dollars could be invested.

Can you give me an example of reimagining existing investments?

The Philadelphia School District has also invested in re-engagement strategies, including Accelerated High Schools, even while the district was going through a financial crisis. The District has now established the Opportunity Network, led by an Assistant Superintendent, to set priority to and increase high-quality options for off-track students and out-of-school youth.

The Philadelphia Youth Network (PYN) serves as the backbone to Project U-Turn. In this role, PYN convenes, guides vision and strategy, supports aligned activities, and mobilizes funding. This work is coordinated by PYN’s Senior Associate of External Affairs and is overseen by the Executive Vice President.

When we began Project U-Turn, we formed a small steering committee of decision-makers. We eventually became part of a broader economic imperative for the city. With this broadened scope, it was challenging to have a small group of people (the Steering Committee) directing activities without understanding many details of the work. So, instead of a small steering committee, we’re bringing together a more diverse set of partners. Some of these partners have been there since the beginning, while others (e.g., the District Attorney’s Office, employers) are new. As we understand the system young people must navigate after they complete high school, we’re increasingly involving those parts of the system. We’ve had various working groups throughout the years that have focused on different things; we adapt to the need.

As these structures have evolved, it has been helpful to have a consistent goal across all these structures – a North Star of high school graduation rates. From this North Star, we define specific targets for policy, new interventions, and so on. While there’s always a lot of exploration and reflection, the goal remains consistent.

Project U-Turn has released some influential reports. How do you use these reports and the data therein to advance your cause?

The most recent report called From Diplomas to Degrees looks at a cohort of 9th graders through their early 20’s to investigate degree attainment and other important issues. In preparing to release this report, we took some critical steps:

First, we presented data as it became available. The data went before a committee and was vetted so that we came to a common understanding of what the data is telling us. We asked “what concerns you about the information?” and “What alternative explanations are possible?” We also included youth in the vetting of the report.

Next, we vetted the data with leaders in the system. Of all the things we do to advance partnerships and align to the common goal, vetting reports with system leaders prior to publication is the most powerful approach we have. These sneak peeks serve to:

We know about Project U-Turn’s progress against the drop-out rate. What systems-level changes have you seen since Project U-Turn began?

We’ve seen many introductions and scaling of new practices. For example:

How has Project U-Turn been able to sustain its momentum?

To sustain the initiative, it can’t be just my job. In Philadelphia, there is a real sense of communal ownership around moving the needle. We are incredibly fortunate to have long-term partners at the system, program, and community levels. There are real champions, and the sustainability is dependent on them. We have also benefited from having a mayor who understood the dropout challenge. We are experiencing a mayoral transition now, and we are proud to have the new Mayor’s support behind this important work moving forward.

Strong collateral and data are also very important to us. While relationships are unpredictable and dependent on personalities, data can be neutral.

What challenges have you faced to sustain the initiative?

One challenge has been to have conversations about equity. It’s tough, because someone has to keep beating the drum, but I have a lot of drummers! There’s not a formula to having equity conversations, but we’re fortunate that people understand it as a priority.

Another challenge is that policy change can be slow, especially when building relationships with folks and getting them to understand the complexity of the issue. So, we make it a priority to bring new leaders up to speed.

The chief sustainability challenge is having consistent, long term funding commitments. This is not a 2 or 3-year problem, and the investment needs to match the type of change you are seeking.

How has your approach to equity evolved?

With Project U-Turn, equity has been part of the conversion, but not the driver. There are clear disparities across race, geography, and to a certain extent, gender. So, equity has always been there, but national efforts on equity have given permission and latitude to bring the issue more to the forefront in a way that people are willing to hear. This is a valuable conversation and it gives us a license locally that we did not have before. When the Superintendent or Mayor stands up and says that equitable education is the civil rights issue of our time, then you have someone’s arm to lock with.

It’s more difficult to talk about the role of privilege – where does it hide and how do you check your privilege? That’s sobering and personally uncomfortable. It’s tough. We’re asking the question and setting up a structure for people to explore. We’re familiar with the impacts of inequity, but we are uncomfortable when we talk about privilege and how that plays into inequity. The distribution of power, privilege, and wealth all matter.

How do you have conversations about equity and privilege?

We have gone from a neutral facilitator to a transparent facilitator. We have a perspective, and we can still facilitate without hiding that. That was a huge shift for us.

We had to start by looking at ourselves – having the challenging conversations with our staff, checking our approaches and asking if we were contributing to the problem, if privilege was hiding in our approaches, and so on. Taking the hard look in the mirror was critical.

We work with a lot of people who understand this work differently. You have to understand and respect where people are coming from. The key is about respecting people’s boundaries and expectations, and that includes when there is disproportionate impact on the community, and to meet them where they are. You have to go deeper to understand better. This happens one person at a time, and it’s slow work. You need optimism, energy, enthusiasm, professionalism, and rigor. That’s how you make change happen. You might have to look back in five years to see that things have changed.

What do you think? Share your questions and comments below.

View more in this interview series