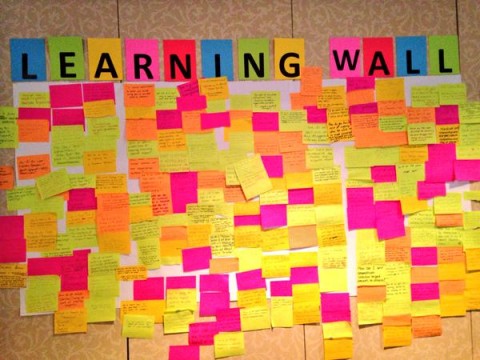 Just returning from the Champions for Change gathering in Washington, DC hosted by the Tamarack Institute and the Collective Impact Forum. I was in attendance with a couple of others from the Food Solutions New England Network Team to learn more about people’s experiences with creating and developing a “backbone” function in their “collective impact” efforts, and also had the opportunity to do a couple of skills sessions around IISC’s “Dimensions of Collaborative Success” framework from Facilitative Leadership for Social Change.

We took in a lot from the gathering, which featured attendees from around the US and several other countries, and were encouraged by the proceedings, especially to hear how conversation is evolving in the larger collective impact community around equity, community engagement, as well as complexity. Highlights for me personally, beyond meeting many interesting and committed people doing good and interesting work, were a break-out session on racial equity; Paul Schmitz‘s (formerly of Public Allies) plenary talk about collective leadership, privilege, and community ownership; as well as a conversation with seasoned backbone participants about their successes, challenges, and innovations. To flesh this out a bit . .

Getting Serious About Equity

In a session called “How to Advance Equity through Collective Impact,” Sheri Brady of the Aspen Forum for Community Solutions facilitated presentation and conversation among panelists Joanna Scott from the Race Matters Institute, Richard Crews from Thriving Together, and Juan Sebastian Arias from Living Cities. The point of departure was that, in order to truly solve complex social issues, structural inequality along race, class, gender and culture lines needs to be addressed head on. Furthermore emphasis was put on the importance of leading with equity, and not simply diversity and inclusion. Here are a few quotes that I gleaned in the course of the conversation.

“Equity starts at home, in your backbone.” – Richard Crews (you’ve got to walk the talk from the start and from the core)

“If you have a bunch of tokens, you aren’t getting anywhere on the expressway.” – Richard Crews (you’ve got to move beyond tokenism around diversity and inclusion to genuine and equitable engagement)

“Too many people do not think about systems as being racist.” – Joanna Scott (racism operates at multiple levels, and if we only focus on the interpersonal level, we are not truly engaged in needed structural change)

Getting Real About Community Engagement and Privilege

I have to say that one question that kept coming up for me during the gathering was, “When people say ‘the community,’ who are they talking about?” Everyone? Residents? Those most negatively impacted? It would be good to be clear about this in any given mention of the word.

That said, Juan Sebastian Arias and Paul Schmitz spoke and tweeted compellingly about making broader community engagement central to and not an afterthought in collective work, as well as to pay attention to how privilege operates in any given context.

“You are never done with community engagement. You need to always be engaging.” – Juan Sebastian Arias

“Engaging communities is not about how the community perceives ‘our’ work, but how they own it.” – Paul Schmitz

“How might power and privilege distort the lenses of your collective impact effort?” – Paul Schmitz

Lastly, for now anyway, a note about what I heard as a repeated explicit and implicit theme throughout the gathering and in a deep dive session with those who have been engaged in backbone activities for a while. An ongoing challenge and key to supporting the promise of collective impact is to keep a variety of flows going. Certainly that includes the flow of financial support, but also the flow of ideas, of people, of leadership, of power, of generosity, of energy. Also flow with respect to adaptation of organized form and approach, and evolution in terms of understanding of problems/opportunities and viable/systemic solutions.

If things stop flowing, pooling and stagnation can quickly ensue, people can get complacent, bureaucracy can crop up, groupthink and an attitude of exceptionalism and exclusivity can take hold or get reinforced. Which is why it’s important to keep bringing the network lens and network thinking to this work.

Curious to hear from others who were in attendance.