Earlier this year, the Collective Impact Forum gathered feedback through its second annual survey of members who have created an online profile. The purpose of this survey was to assess the Forum’s progress to date and to better understand needs in the field. 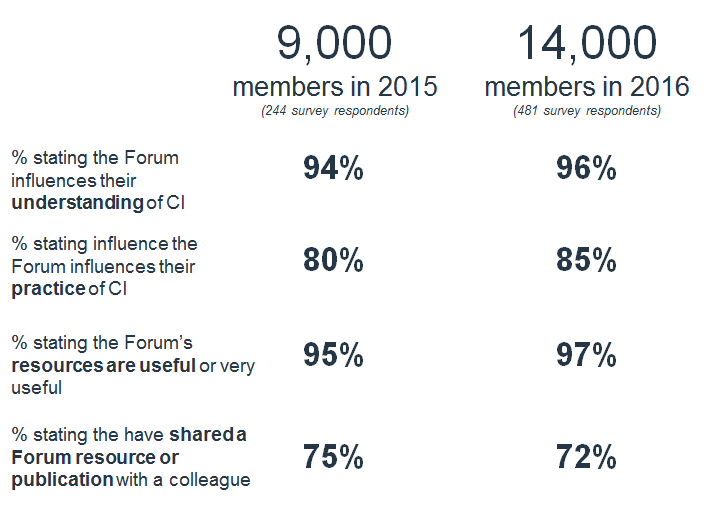 A few notable results about the Forum’s progress over the past year:

Like we saw in last year’s survey, approximately three-fourths of respondents said that feedback from an expert or thought leader would be motivating or very motivating to them to participate more in the Forum’s online community. In response to this feedback last year, we launched an “Ask Me About” feature, where experts from across the social change field answer questions on a specific topic. Look for more “Ask Me About” conversations in the year to come.

In addition, survey respondents want more proof points and stories from other collective impact initiatives. Reinforcing the need for more stories and profiles, we recently launched an Initiative Directory for Forum members to share progress updates from their collective impact initiatives, and we are currently building a “share your story” feature where Forum members can more easily share stories from their projects, including what they are learning and what challenges they have faced.

Survey respondents also highlighted priority topics that the Collective Impact Forum should address in future convenings and webinars, including these top five issues:

Beyond the valuable feedback on priority issues/topics, other notable findings about the collective impact field’s needs include:

Thank you again to those who completed the survey. For the second straight year, your feedback has provided valuable insights on the Forum’s work and needs in the field.

What do you think? Do you have any other suggestions or feedback for us to better support the collective impact field?