A Mayor’s View: The Effect of Collective Impact Initiatives on City Hall 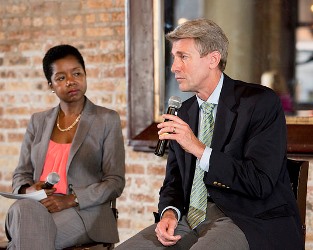 This interview was originally posted to Living Cities’ The Catalyst on July 29, 2014.

In our journey to explore and learn more about the role of municipal government in collective impact initiatives we had a wonderful opportunity at our most recent Integration Initiative Learning Community convening to interview former three-term Mayor of Minneapolis, MN, R.T. Rybak, who is now a part-time Senior Advisor to Living Cities. As mayor, R.T. participated in several collective impact initiatives focusing on an array of issues including youth violence, transportation expansion, education reform, and chronic homelessness. Below are some highlights from our insightful conversation with R.T. To learn more from R.T.’s experience, watch a highlight video of the conversation, below.

What did you learn about the role of philanthropy, government, and community in collective impact initiatives?

One major thing I learned is that it’s not philanthropy’s job to rescue government. Philanthropy is the jiffy lube that can help make government run, but it is not a substitute for government or an antidote for things not working in government. Collective impact models like The Integration Initiative (TII) can serve as a vehicle to disrupt the government power grid that is often more interested in maintaining control than achieving results. The beauty of the collective impact table is that it jumbles up that rigid government power grid allowing equal distribution of power around the table. In TII and other collective impact initiatives that I was a part of as Mayor, the table allowed the power to shift dramatically, setting the mayor and other elected officials on equal footing with non-profit partners and community members most impacted by the problem we were trying to solve.

How critical is the role of community?

Like I said before, collective impact initiatives can really shift the power dynamic putting mayors and other electeds on equal footing with community. That power shift forces elected officials to recognize how much he or she needs other people to bring about real systemic change that goes beyond their term in office. In working with such an array of partners I had to walk humbly into those meetings, embracing the idea that the change that was needed was only going to be sustainable if I practiced true servant leadership — which is not easy for type A elected officials, like myself, who often feel they need to have all the good ideas and make it all happen on their own steam. Around our youth violence initiative work, I went into those community meetings knowing that I did not have the solution. Listening to the young people and their families impacted by the violence led to some critical policy changes that would not have happened without that community voice at the table.

What is your advice to elected officials beginning to work in collective impact initiatives?

Elected officials need to accept that there is virtually nothing they can solve totally on their own. I’d advise them to do some real soul searching from the very beginning asking themselves – Am I really trying to do collective impact or am I trying to get a bunch of people to say “I like your idea Mr. or Ms. Mayor?” If the latter is the case then I don’t think they’ll achieve the type of success that’s possible through these efforts nor will they improve the lives of the people they were elected to serve.

What is your advice to those outside of government?

Those outside government need to recognize when they are being brought in as equal partners and when they are not. If equal partnership is not happening they need to push back, letting their elected officials know that they understand the difference between just supporting a mayor’s ideas versus engaging in true collaboration. If those outside of government want effective collective impact they must push their elected officials for shared results, outcomes, and accountability from the very start.

What role did race play in pulling together collective impact tables?

Race was and is a big part of the equation especially when you are pulling these tables together. Often we would find ourselves in meetings with the top people from our philanthropic institutions and social service agencies which was a good thing, but the racial make-up of that meeting was often all white or predominately white people trying to solve the problems of communities of color. We had to racially and ethnically expand the table so we could have an authentic conversation about who we are ultimately trying to help, understand the differences and similarities in experiences of an African-American youth living on one side of town versus a Somali immigrant youth living on the other side of town, and make collective decisions based on that knowledge. The ability to have those conversations drive policy and change was one of the major benefits of working in this new way.

Want to learn more from R.T.? Watch additional highlights from the Q&A: